One thing that came to my mind about these wars. There are times where there's a huge different in points from both teams which can cause fatigue and discouragement to the losing team. I believe there are players that wouldn't take the stress anymore after being shelled, shocked, bashed, crashed and topped majorly multiple times by enemies. Yet, they still have to race even though there can be no chance of making a comeback due to how big the difference is.

This makes me wonder, what if there was an optional vote to surrender system? Not just straight away but any time during the second half, like what Pokemon Unite has. In my opinion, it could give other players time to cool off and avoid further humiliation from a winless scenario. I mean if the result was already decided during a war with no signs of a turnaround, it could save the trouble just by declaring the winning team as simple as that. This is only if the team has a choice to throw in the towel or fight until the bitter end.

What do you think? Would this system work or would it just cause nothing but disruption to everything?

Site Supporter
if you're not mathematically out of the war theres no reason to tilt and no reason not to keep trying.

Staff member
Administrator
Amplify Staff
Site Supporter
Founding Member
I can only think of one sport (outside of esports) where it's normal for a player or team to concede while far behind, and that's curling. In curling, you score points based on how many stones are closer to the center of the target than the closest stone your opponent has. So if you're in the last end, and you need to get 4 or 5 stones closer to the center than your opponent (which is extremely unlikely), the team may concede and hand over the win to the opponent.

That being said, in most big sports, that would be the exception, not the rule. In football (all types), hockey, basketball, baseball, etc, as well as athletics like running or swimming, participants play to the end. Not only is it a show of good sportsmanship, but it allows the team or player to keep track of statistics to learn from, either for the league or themselves. In MK, this can be extended to statistics for the division tables, as well as encouraging teams to practice against tough opponents and see how well they can do even if they lose.

There's an argument to be made of ending the match if it's mathematically impossible to win, but I'd personally only consider this in elimination / best-of-3 matches. The issue with MK is that sometimes penalties are applied after the fact, and if a bracket match were to be played with a penalty come up after that would change the situation, it gets a lot tougher to decide on whether the team should automatically win when there were races remaining. So my stance is to let all matches play through in full, even in impossible-to-win situations.

Bunta said:
if you're not mathematically out of the war theres no reason to tilt and no reason not to keep trying.
Click to expand...

I would say that the chance to surrender should be allowed in all elimination stages on MKC however trying to make the system work in a round robin situation that involves having a point differential being a tiebreaker is a whole different discussion and case by case optimization that it would be too much effort for it to be worth it and there will always be some floors no matter what, like teams surrendering as early as possible to prevent a massive point differential and penalties as mentioned by Jazzy.

As for the elimination stage, I am all for it because it has no downsides, apart from players playing less races but that is it. With the penalties the only two cases where surrendering is a problem is when a unregistered player/fc is playing for the winning side or there is cheating involved that would be penalized heavily. In which case the matter should be discussed by staff to see the best way to deal with it.

On top of this, I would also invoke of when this system can only be used when there is no mathematical way of winning and there is no suspicion of penalties involved that could be brought up by the losing team.

I just put my thoughts out there if it is incoherent, my bad.

EDIT: I forgot to mention, if a team surrenders then they should be allowed to not play their next match immediately after their surrender and can wait until the scheduled time for when there are back to back matches either in a double elimination/velocity/Bo3 format.

Then work on your mental.

Bunta said:
Then work on your mental.
Click to expand...

Not talking about mine but thx for your pro mk8dx tips

Site Supporter
This would mess up differentials in the case of a tiebreaker, as stated earlier, but I will try to propose how this could work - maybe each team is given two opportunities to surrender in each half of MKU (2 in the 1st half, a fresh/reset 2 in the 2nd that does not add on to the remaining surrenders from the 1st half) and have a rule in where a team cannot surrender unless 10 or so races have been played. That way, they still have the chance of minimizing the final differential; if a surrender occurs, maybe the last few races are just scored based on the final race that was actually played (e.g. If one team finished 1 2 6 7 8 10 and the other finished 3 4 5 9 11 12, and the latter team surrenders on race 11, then race 12 would have team A finish 1 2 6 7 8 10 and team B finish 3 4 5 9 11 12) and the final score could be calculated that way. This system would make it so that if it's impossible for a team to win at that point, they can minimize the differential if they got a winning/slightly losing race 10 or 11.

If implemented, I could only see it being used in the lowest few (like, 3) divisions as those are the teams that are generally newer to the scene and, thus, more prone to having a mindset that doesn't match the mindset in higher divisions. It's doable, but it would take some testing to make it work.

The negatives also exist, being that some teams may just abuse their surrenders immediately after race 10 or so, even if their spots weren't very good. It doesn't help their mindset either, as they can bail out instead of getting experience and finishing the war out (although the limited opportunities solution may help out with that). It's also possible that a team may not have foresight in terms of the strengths of other teams and surrender race 11 when the differential is -50 or so; if they are out of surrenders, their differential overall could be negatively affected by another team who defeats them by 148.

Again, testing would most definitely be required for the surrender system.

Staff member
Administrator
AC Staff
Media Staff
Founding Member
I actually like the idea of matches ending early in settings where point differential never matters. I think it could even speed up our bracket tournaments a lot.

The goals change from keeping a match within 100 points to taking X team to 10 or 11 races, for instance. I think it could prevent teams from wasting a lot of time waiting on every result in some of our wars. Matches should only end with mathematical elimination, though. 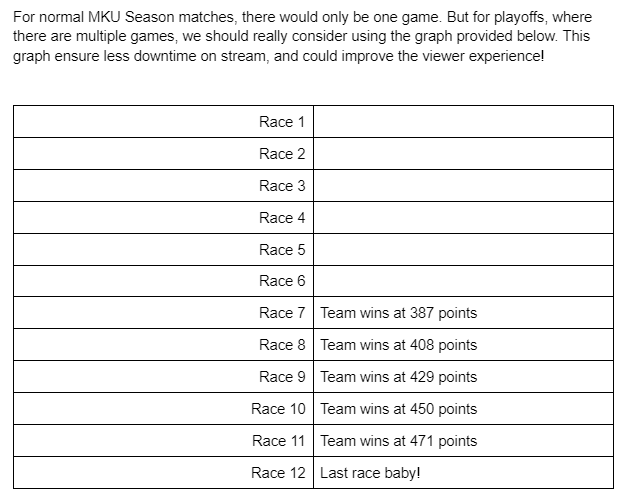 Credit to Drag for making this.

I could actually see something like this replacing +/- (a metric we don't like very much to begin with because of forfeits) entirely if you're smart about it, and instead replaced with a system that is focused on

I think you have less forfeits in general here and in matches where the teams are clearly mismatched, it creates new incentives / goals for both teams on a by race basis.

Obviously people think it's honorable to "tough it out" and I understand that philosophy, but I just don't see the reason to waste time in tournaments finishing a war that's already been decided. It's a really interesting topic at least in my mind that's worth a discussion. You wouldn't be forfeiting if the match is over by rule.
You must log in or register to reply here.
Share:
Facebook Twitter Reddit Pinterest Tumblr WhatsApp Email Share Link
Top