a. Players must register themselves through this thread.
b. Players must have an account on mariokartcentral.com and be registered on the site registry.
b.i. If a player is found to be using an alternate account to deceive the tournament organizers, they will be punished by Mario Kart Central staff and immediately disqualified from the tournament.
c. Players intending on hosting must provide their Discord ID (ex. Cynda#1979) in their registration post as well as stating if they can host.
d. Players banned from Mario Kart Central are prohibited from registering.

d.i. Should a site-banned player create an alternate Switch FC and have a non-site banned player register and claim the Switch FC as their own, the non-site banned player will be immediately disqualified and will face punishment from Mario Kart Central staff.
e. Players must play with the Switch FC they registered with for the tournament. If a player needs their FC changed, they should notify organizers in advance.
f. If you wish to cancel your registration, please post on the tournament thread or message a member of Mario Kart Central Staff.
a. Players who sign up for the tournament agree to the rules and the final decisions of the FFA organizers.
b. Free choice of tracks, vehicles, characters, and controllers.
c. All rounds will consist of normal items, 150cc, and CPUs off.
d. Each round prior to the Final Four consists of 8 races.
e. The Final Four and Finals will be 12 races.
f. Repeats are -10 points and reset each round.
g. Players found with game-breaking lag will be disqualified, and staff will be alerted. (Example: constant warping, causing roulette to have massive lag, etc)

f.i. For example, if there is one room without a host, the last 12 participants to sign up will be disqualified.​
g. If a host is found to be breaking hosting rules, they will be banned from hosting future tournaments.
h. If 2 or more players are missing from the results screen after a race, the race will not count and the room must be restarted.
i. If a player not intended to be in a room joins, any races played with that player will not count and the room must be restarted.
a. Hosts are responsible for taking screenshots of the room’s final results and posting them on the tournament thread.
b. Hosts who do not take pictures will not be allowed to host future tournaments.
c. When posting results make sure to clearly mark what room you were in, show who is proceeding to the next round, and post every player’s switch FC next to their name. (Copy and pasting from the rooms post is the easiest way to do this)
Registration:

Sign-ups are done through a Google Form, found here.
Players must have an account on the MKCentral Registry to play the tournament, instructions can be found below.

Founding Member
#3
Registration is now closed. Seedings will be released later today. When that's done, we'll have a bracket prediction game running on challonge for anyone interested, in the spirit of the bracket challenge for the rest of the day.

See you all tomorrow!

Founding Member
#5
Rule changes have been made under the Scoring tab for this event.

b. Prior to the finals, players who disconnect will receive +2 to their score per race missed.

Has been changed to:

b. If a player disconnects before a race and this is communicated to the opponents before the race starts, the host should close the room.
c. If a single player disconnects during the race, whatever the final results are in game will be the results for the race.
d. If there is a missing player during a race, such that the results only have 3 people, all 4 players will be rewarded an extra point (the missing player will then get 1 for the race).
e. If multiple players disconnect in a race, the race will not count. If it is found out or even likely that a team is doing this to try to manipulate the rules/results, the results may stand and the team may be disqualified or banned from future site events at the staff's discretion.

If you are having trouble contacting your opponents, a list of all the registrations may be found below:

We highly recommend that you arrange matches via Discord DMs. Most people you need to contact will be in the MKC Server or in the March Madness channel. If you want to be tagged for exclusive March Madness info, make sure to go to the tournament-roles channel and type ?rank march madness

Additionally, the team on top on each challonge matchup will be hosting the round. For example,

Pyrax / Lez will be the team that hosts this match. This will go for every match in the tournament.

Obviously in a multiple round tournament, we need to move relatively quickly. We likely won't take penalties for host related timing issues unless a team is definitely potentially bottlenecking the bracket. Please be responsible, check the bracket, and read our announcements on Discord throughout the day if you're still in. If any opponents are causing issues, please dm Cynda or I on discord or any other EO Staff who may be online.

Please post all results here, with some sort of picture evidence. The first four rounds will be 8 races, while Final Four Matches will be 12.

Since we already know the Round 1 matchups, rooms should be up by :05 and starting before :10 for Round 1.

One additional rule has been added to scoring as well:

f. In the event of a tie, one additional race will be played as a tiebreaker.

Good luck to everyone tomorrow!

Founding Member
#7
We've made a few slight rule updates before the event, this should probably be the final one.

f. Repeats are -10 points and reset each round.

f. Repeats are -5 points and reset each round.
k. Trolling (i.e. going a lap behind to hit people with items) is banned on all tracks aside from GCN Baby Park.


This is simply because -10 is a ton in 2v2, and we believe that getting triple reds and lap trolling is a strat we'd prefer to not have appear for teams in bottom 2.

Founding Member
#9
No answer from Act either so we take the win for this round.

I am the same skill as shiiguy 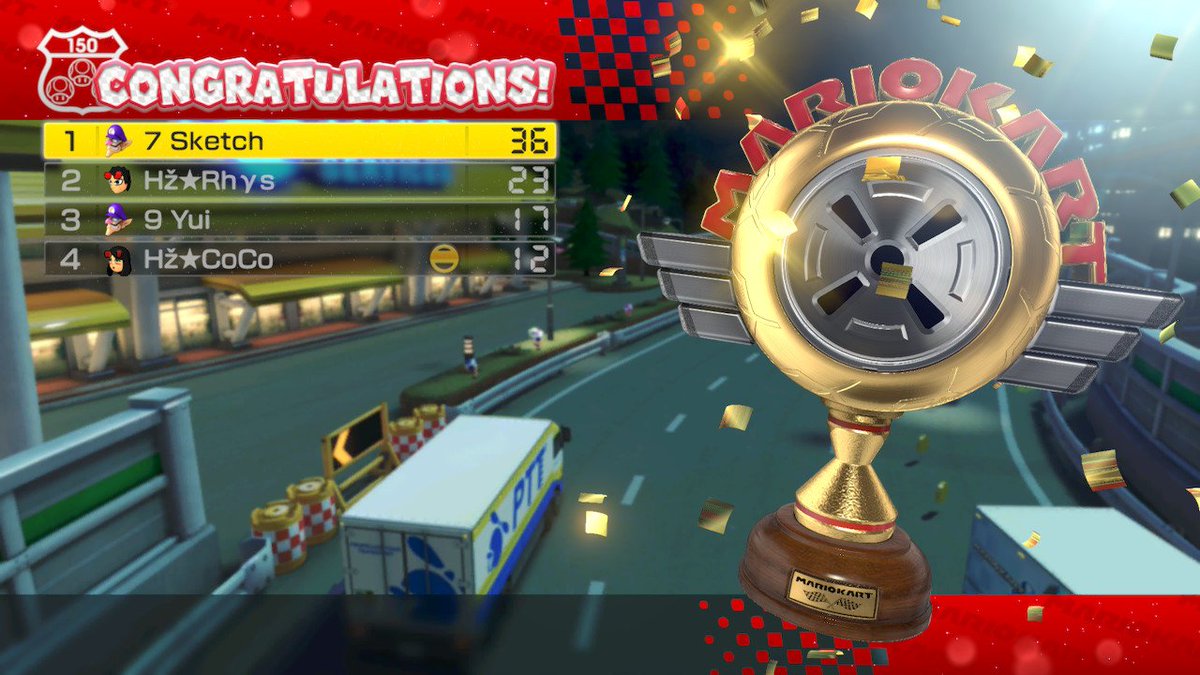 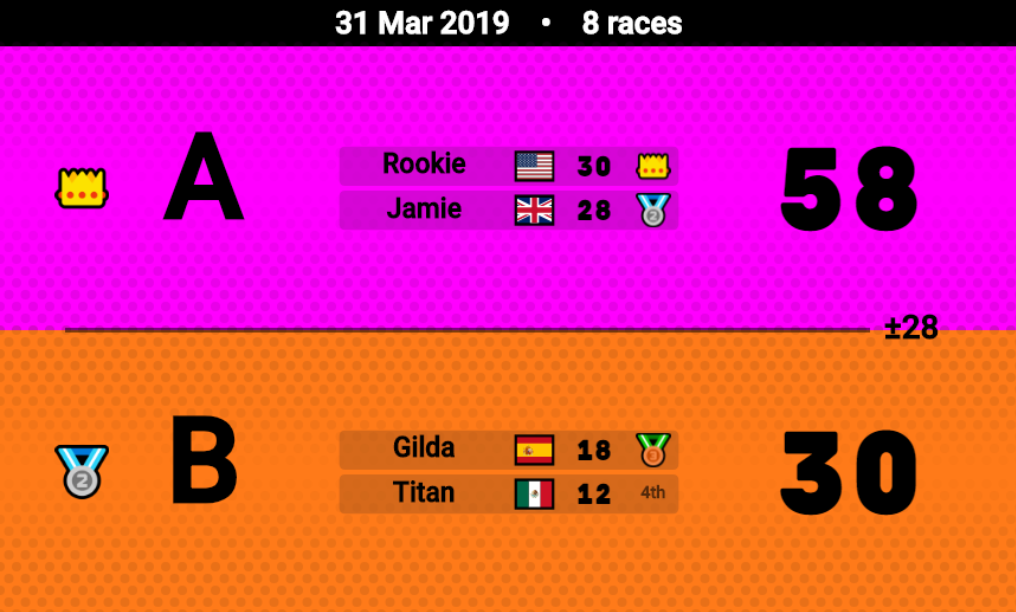 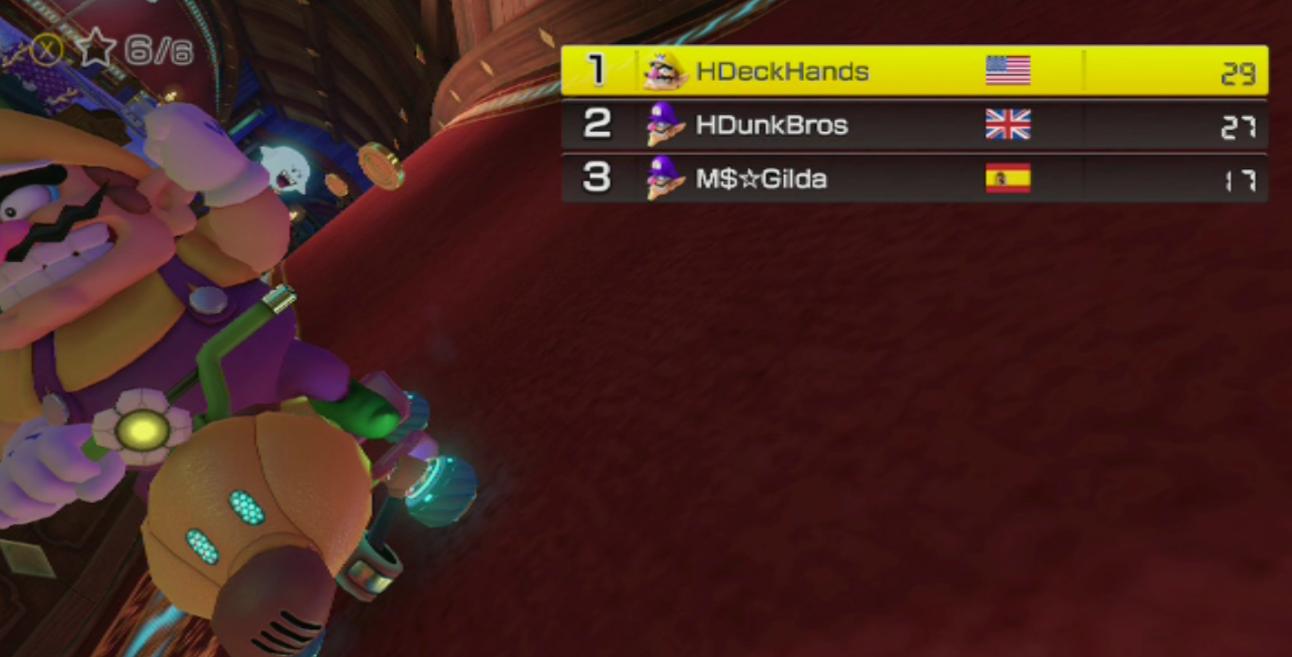 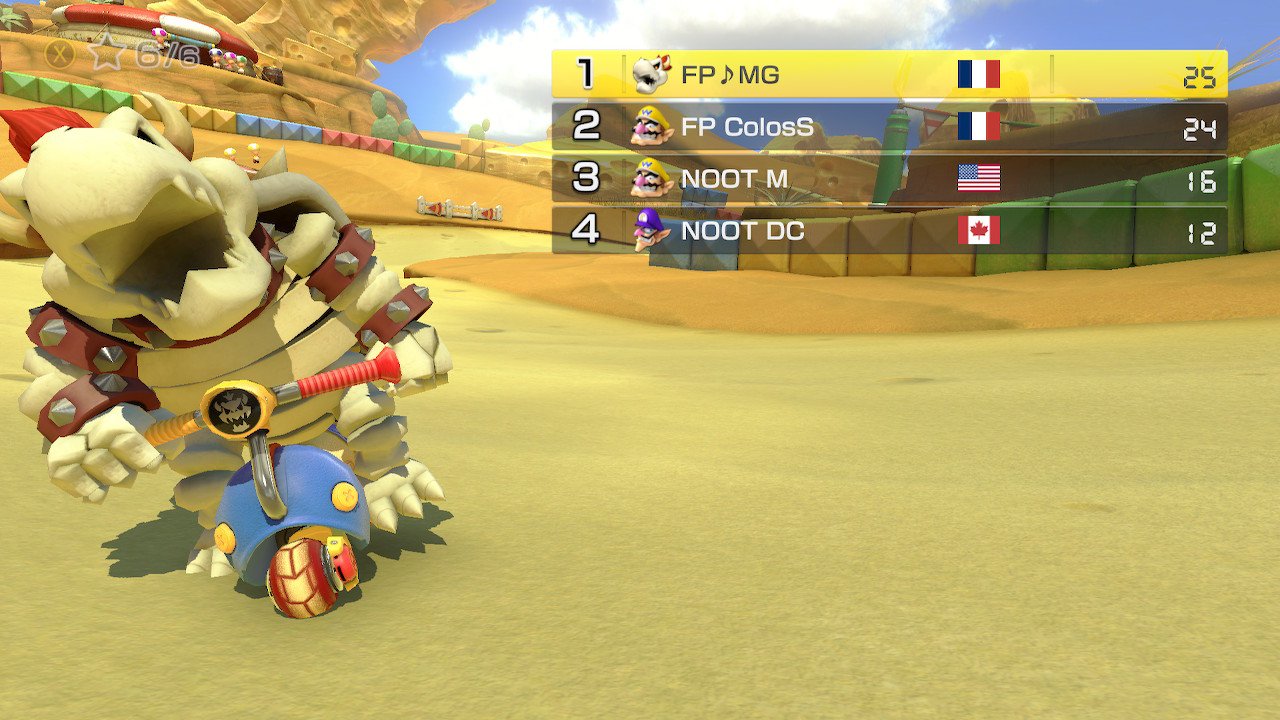 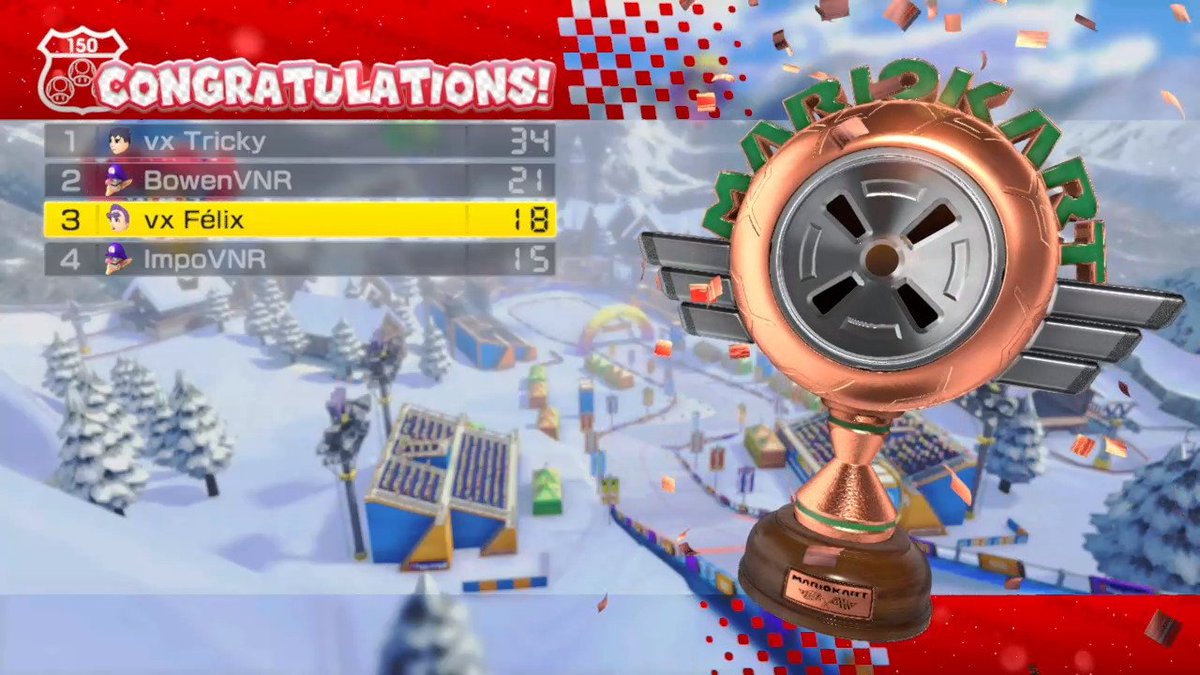 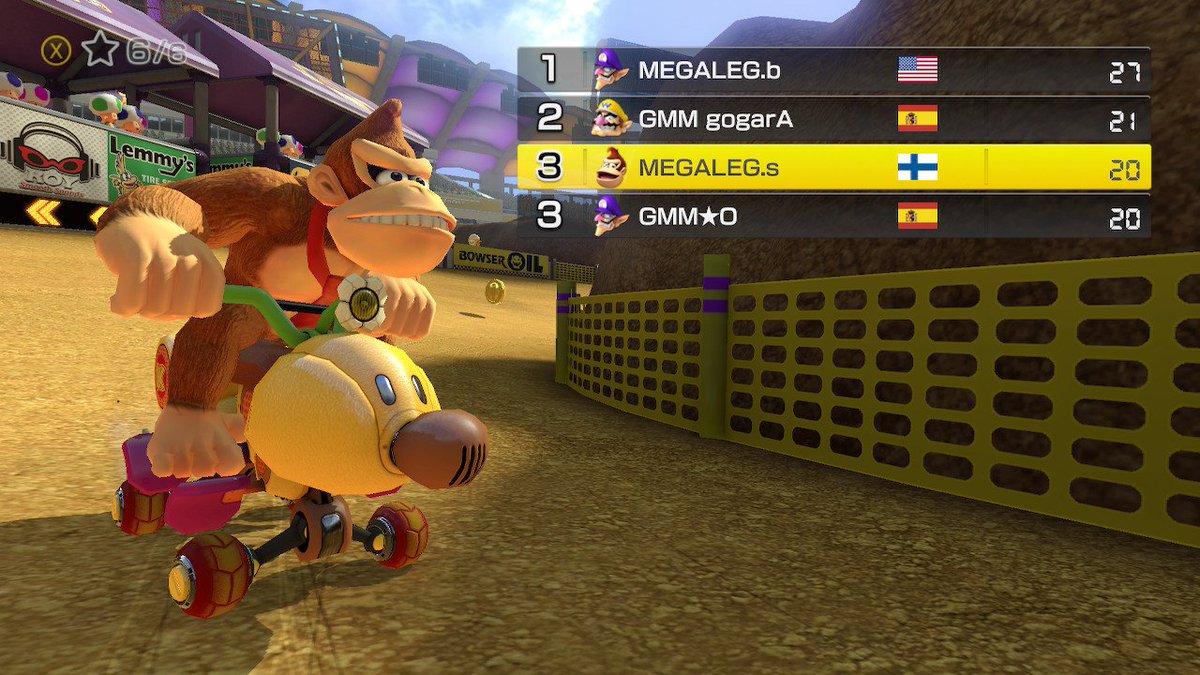 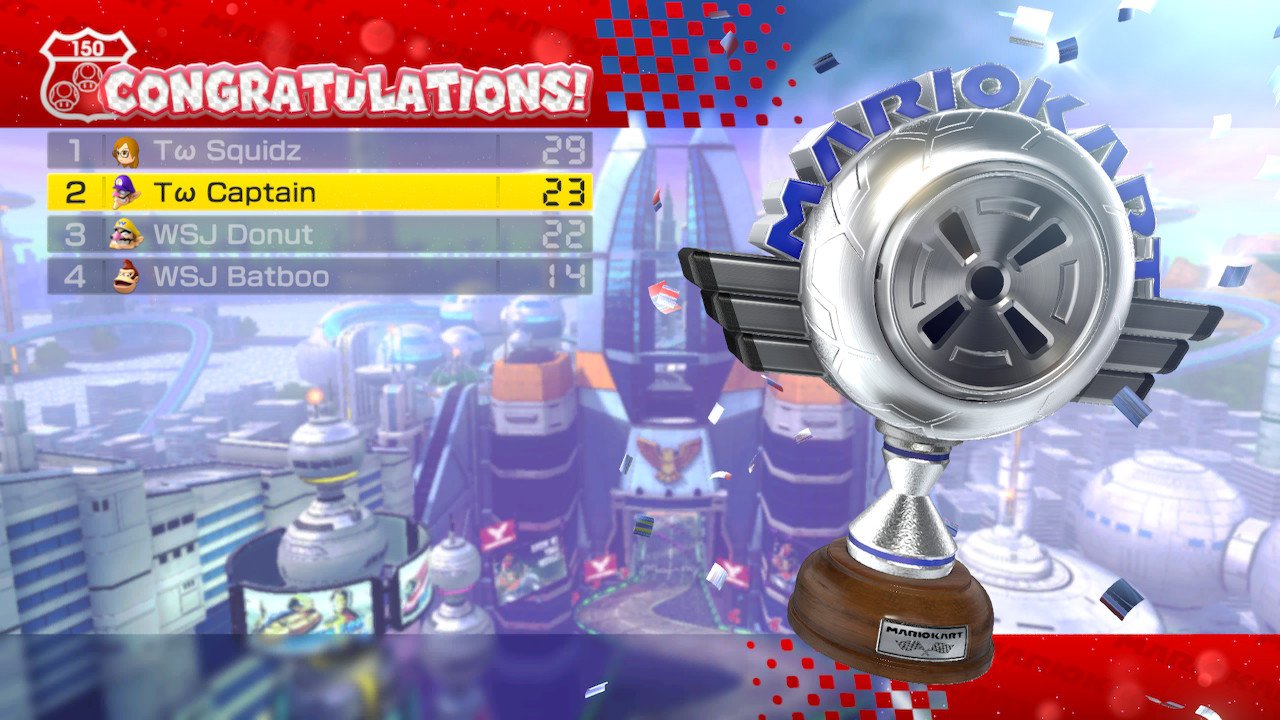